skip to main | skip to sidebar

We are overwhelmed at the response from our community and the mission that has spread around the country. THANK YOU for fighting this battle with us.

We just wanted to thank everyone for donating snuggies to Jack's Closet. We have over 150 snuggies at our house right now to take to Children's Hospital with us on Wednesday. The generous traders at Capital Institutional Services collected around 100 snuggies for Jack. We also received them from employees of Unifocus, Coach Croft and the U11 Coppell Cowboy Red Baseball team, and many other friends and neighbors. WOW! What a generous community. Thanks again for supporting our quest to cover every child fighting cancer with warmth and support! Giora and Jack
Posted by M & D at 1:35 PM 1 comment:

We started this as a way to stop writing on our hands and start raising money for our friend and football star. We are in the 6th grade. Jack is in our class. We used to write JB all over our hands in support and then we got an idea. We made bracelets that say "JB" and we started selling them to raise money for Jack. We set up tables at lunch. We sold at football games to the community. Corban Bookstore in Coppell let us set up a table to sell. Pamela's Boutique helped sell bracelets. All the waiters at Anemia's bought bracelets. Bankers at Tom Thumb bought bracelets. Slowly our community grew in support. The next thing we knew Jack wanted to take the money and buy snuggies because it is what has kept him warm through treatments and he wanted to make sure the other kids at Children's Medical had that same comfort. Then, guess what?! The snuggie company, All Star Product Group, found out and gave us 100 SNUGGIES!!!! And now we are on the news. We would love for you to join in this cause. If you would like to make a donation, please hit the donate now button on the right and this will go directly to Jack to support the cause of children battling cancer.
Posted by M & D at 11:24 AM 2 comments:

Background Story
Jack was diagnosed on Thursday, September 10, 2009 with T-cell Acute Lymphocytic Leukemia (ALL). He was not feeling well since Friday, September 4. He complained of stomach pain and being tired. He did not run a fever or have any other symptoms. He did experience some shortness of breath during strenuous activity over the weekend. He continued to feel tired and run down for the days following. He would go to school, but would come home halfway through the day complaining of a stomach ache. We got him in to see our wonderful doctor, Tony Swaldi, on Wednesday afternoon. That day he had been at school, but once again came home around 12. I took him in for his appointment and Tony examined him, but there was really nothing visibly standing out as being wrong. He suggested some medicine for his stomach pain. He was going to give me samples. We decided to run some bloodwork - just in case. I was thinking...maybe Mono. Thursday, he came home early from school again. I had to go downtown for a while, so he stayed home to rest. He called my on my way home and said his stomach really was hurting. I had forgotten the samples the day before, so I put in a call to Tony to see if I could come by to get them. He said yes and in the mean time he would check to see if the results of his lab tests were in. When I walked in the office, Tony had just received the lab report and I could tell by the look on his face something was wrong. Cancer did cross my mind quickly, but I dismissed the idea right away thinking "no way!" Tony asked if I had a minute to talk. I went to his office and sat down. He came in a few minutes later to go over the results. He began talking about each thing in his blood and what was abnormal...and i didn't understand what any of it meant. I finally said "what does this mean?" He said "I am afraid Jack has some form of Leukemia." I couldn't believe what I was hearing..."Leukemia." I couldn't speak or even sit up...I was paralyzed with fear and despair! I have never been more terrified or distraught in my entire life. I couldn't believe my healthy, smart, athletic, sweet Jack was so sick and we didn't even know it. Tony sent us right down to children's where we have begun this journey. We have learned so much about this disease, but still have a lot more to find out. The nature of acute Leukemia is that it comes on quickly without warning or alot of symptoms. We believe we caught this really early. He began to show more visible signs of the illness on Thursday after he was admitted to the hospital. He came into the hospital with a white cell count of over 400,000. The main thing now is to get that number down.
Posted by M & D at 11:21 AM No comments: 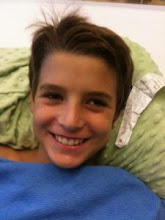 Questions? Email us at thejackfoundation@yahoo.com